In 1884, five Sisters of Mercy, at the request of Bishop Theophile Meerschaert, traveled to what was then known as Indian Territory to establish a school for young ladies at the Sacred Heart Mission near Shawnee. When fire destroyed the school in 1901, the Sisters decided to relocate to Oklahoma City on donated land on a hill just south of downtown Oklahoma City, overlooking what is now known as the Oklahoma River. The cornerstone was laid on December 12, 1903, and young ladies arrived from across the United States to be educated at Mount Saint Mary Academy.  The school building stood as a landmark, one of the few tall buildings in Oklahoma City (The yearbook says "For many years the Academy was the sole landmark on one of the highest points in the area now known as Capitol Hill.")

In these years Mount St. Mary was a boarding school for young women, and it also served as a novitiate for the Sisters of Mercy of Oklahoma.  In the 1910s, the school began admitting local young women as day students in addition to boarding students, and a rear wing including the cafeteria and auditorium was added in 1922.  Mount St. Mary Academy continued as a novitiate until 1929, when the Sisters of Mercy of Oklahoma amalgamated into a union with a larger body of the Sisters of Mercy.  During these early years when Mount St. Mary Academy functioned as a school for girls, the school graduated more than 270 young ladies, at least 32 of whom went on to answer a religious vocation.

In 1950, Bishop Eugene McGuinness instituted a reorganization of Catholic schools throughout the Oklahoma City archdiocese.  The Bishop asked that Mount St. Mary be involved in this new organization, and the sisters agreed to open enrollment to boys as well as girls for the first time in its history.  As a part of this new phase in the life of Mount St. Mary, Father Kenneth Fulton was hired to implement an athletic program to encourage boys to enroll at the school.

As the school grew, in 1959 a three-story wing was added to the north of the original structure to provide more classroom space and an auditorium.  It is often referred to as the "new wing" to this day.

In 1980, a gymnasium and parking lot were added in the southwest corner of campus.

During the 1980s and 1990s, Mount St. Mary was a pioneer in education in Oklahoma City, developing innovative programs that are still among the things that make a Mount Education unique. In 1991 the school was the first in the area to implement an alternating block schedule which better prepares students for the type of schedule they will have in college. The school was also the first to have a fully integrated computer network.

Other innovative programs developed at Mount St. Mary include “Oklahoma History Summer Session” added in 1985, an intensive summer class that takes students all over the state to visit historical sites, and our sophomore “Community Service Learning Program” that places 10th graders as volunteers in local community organizations.  Both programs are still strong and are an integral part of a Mount Education.

In the spring of 2000, the Sisters of Mercy, St. Louis Region, and the Catholic Archdiocese of Oklahoma City entered into a co-sponsorship arrangement with regards to Mount St. Mary High School, making it the first and only Catholic high school in the country to be sponsored by both a religious order and an archdiocese.

In December 2003, the school celebrated its centennial with the kickoff of a $6 million endowment campaign designed to secure the school’s future for the next 100 years.

In January 2004, Mount St. Mary founded an outreach program, the Centro de Oportunidades.  This program continues to provide evening classes in English as a second language (ESL), U.S. citizenship, and GED preparation to the adult community of Oklahoma City.

In recent years, Mount St. Mary Catholic High School, the oldest high school in Oklahoma, has also undertaken a number of initiatives to enhance and improve its programming and services. In the 2004-05 school year the school instituted Advanced Placement (AP) and pre-AP curriculum in all primary subject areas.  In 2005-06 the school began a new PLUSS (Providing the Link to Unlimited Student Success) Program to help those with learning differences excel in a college-prep environment. Beginning in the 2013-2014 school year MSM initiated a 1:1 digital student laptop program. 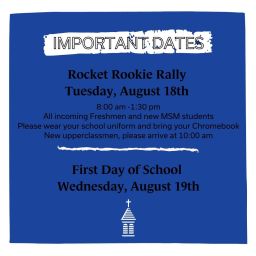